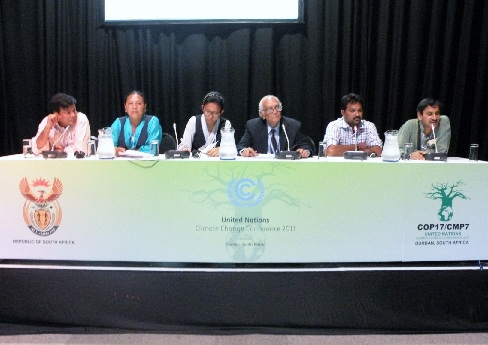 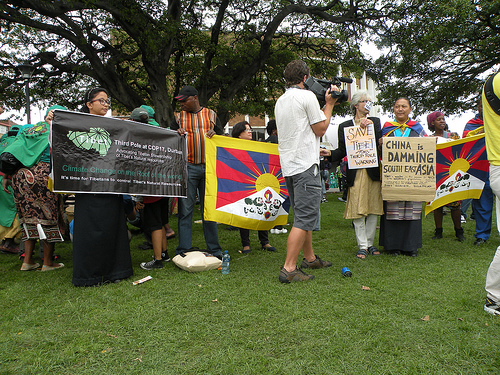 The Tibetan delegates joined NGOs from around the world at the UN’s climate change negotiations to advocate for equitable and durable solutions to the world’s growing climate-change crisis and significantly to represent Tibet at this momentous gathering of 11,810 delegates; 1409 Non Governmental Organizations (NGOs), 86 Inter Governmental Organizations (IGOs) from 200 countries.
Funded substantially by TWA and partly by the Global Fund for Women, the Tibet presence was made possible by accreditation and letters of invitation accorded by Global Campaign for Climate Action and Oxfam, South Africa respectively both through the International Tibet Network, thus providing an alternative voice for Tibet at the biggest climate meeting.

China’s response to the growing climate-change crisis in Tibet has been two-fold. First, China has begun building dozens of mega-dams and water diversion projects to capture and re-direct water from India and SE Asia to an increasingly thirsty China.

Second, China is forcibly removing all of Tibet’s 2.25 million nomadic herders, creating a human-rights crisis masquerading as conservation. This human-rights crisis comes despite the nomads’ traditional ecosystem knowledge and millennia of sustainable stewardship of Tibet’s grassland ecosystems, and despite scientific evidence that shows the nomads’ positive role in promoting ecosystem abundance, diversity, and resilience.

“The world has gathered in Durban to continue addressing the ethical challenge that climate change has created. Does a sovereign nation have a moral responsibility to act not only in its own self-interest, but also in the interest of people living beyond its borders? China’s actions in Tibet answer –no” states Tenzin Woebum, head of the Tibetan delegation.

T3P senses the need to educate governments and fellow NGOs on how the Chinese environmental policies in Tibet are in fact exacerbating damage to the environment, and how China is using climate change to justify controversial policies such as the coercive settlement of Tibetan nomads.

“We are awed by the robust presence of China at the COP-17 meeting and of how parties steer clear of annoying China, thus making it a huge challenge for us, Tibet third Pole delegates, to present the true side of Tibet’s environmental crisis. It is significant to have the Tibet voice heard in this magnanimous gathering of leaders and activists with vested interest. This is especially so when China is painting a different picture of Tibet. The fact that it is two Tibetan women battling to be the voice of global Tibet movement made our representation significant and challenging.” said Tenzin Dolma, TWA’s Joint Secretary.

But the NGOs, UN observers and the media have shown commendable interest in the Tibet story and the Tibetan delegation was successful in keeping the Tibet stakes high at the conference.

The environmental campaigns by Tibetan delegates include lobbying Government delegates with the six key demands (appended at the end of this release) and pressuring them to include Tibet in the negotiations. The women delegates have addressed press conferences, arranged for public talks on Tibet’s environment, made presentations on Tibet’s waters, dams and the plight of Tibetan nomads. The screening of Michael Buckley’s two films: ‘Meltdown in Tibet’ and ‘Nomads to Nobody’ was well received and the highlight of the campaign will be the December-7 public event and book launch of TWA’s publication ‘Purging the Treasure House: Displacement and the Status of the Tibetan Nomad.’

1. An immediate halt to all land uses that threaten the Tibetan Plateau’s ecosystems and ecosystem services, especially the plateau’s water resources;

3. An immediate halt to the removal of Tibetan nomads from the grasslands;

4. The use of social & ecological assessment tools & data to determine appropriate human & ecosystem adaptation and mitigation strategies on behalf of sustainable land uses and landscape-scale conservation;

5. Transparent, inclusive, & participatory trans-boundary resource management & decision-making mechanisms that include all local and regional stakeholders whose lives depend on these ecosystem services, especially Tibet’s nomadic herders;

6. The creation of strategic conservation zones across the Tibetan Plateau as a way to enhance the health of ecosystem services & that involve and support the traditional livelihoods and sustainable land-use practices, both in Tibet and in downstream nations.

Photos from the conference can be viewed here:

Videos are made available here:

________________________________________
[1] Tibet Third Pole (T3P) an international working group of Tibetans and Tibet supporters’ and was formed by the International Tibet Network in 2009 during the COP-15 summit at Copenhagen, in response to China’s threat to Tibetans and Asians alike. T3P seeks to build alliances and collaborations with scientists, governments, NGOs, and peoples across Asia whose fate and future depend on the ecosystem services that the Tibetan Plateau provides. Website is : www.tibet3rdpole.org

[2] Tibet is known as the Earth’s Third Pole because it holds more freshwater, stored as glacial ice, than any other place on Earth except the Arctic and Antarctic, the Tibetan Plateau is warming twice as fast as the rest of the world. Scientists are already warning of the disruption of vital ecosystem services, including water resources, as well as increasing risk of catastrophic floods, and impacts to the Indian monsoon, which provides vital rainfall to people from Pakistan to eastern China. 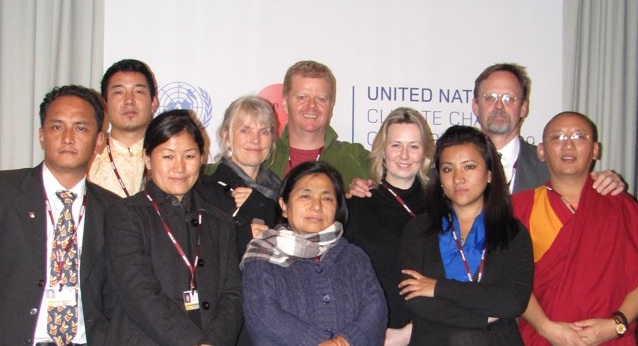 Two representatives from Tibetan Women’s Association, Tenzin Dolma (Joint-Secretary) and Tenzin Woebum (WED Desk), will join the Tibet 3rd Pole Group along with other Tibetan environment activists to participate in the 17th Conference of Parties (*COP 17) at Durban from 28th November – 9th December 2011. Our representatives aim to build alliances that will help bind the key issues of Climate Change and Human Rights.

In most parts of the world women are one of the most impacted groups on Earth by the climate crisis. Gender and Climate Change is thus a strong interest for TWA as a women’s NGO. We wish to network and collaborate with other women’s climate change groups in order to leverage the appeals of women affected by climate crisis, in addition to highlighting the challenges faced by women living inside Tibet.

Tibet 3rd Pole group will engage in campaigning activities and alliance-building beforehand. This will not only maximize the effectiveness and legitimacy of the campaign, but will build campaign capacity in the field of environmental justice for the Tibetan people, both inside and outside Tibet. Our involvement will also enhance alliance-building with NGOs from around the world, and further our longer-term goal of a sustained alliance of Tibetan and western NGOs working on core environmental issues on behalf of Tibet.

Our team will work with NGOs and representatives of affected peoples from mountainous, polar and grassland eco-regions similar to Tibet’s subsistence herding, farming and access to / control over water resources. TWA will also focus on NGOs that bring together women, environmental justice and environmental self-determination, highlighting issues of women and climate rights and climate refugees.

TWA’s President Kirti Dolkar Lhamo and Research & Media Officer Tenzin Dhardon Sharling participated in December 2009’s COP15 summit in Copenhagen. TWA’s representatives worked as a Tibet 3rd Pole group which is the Campaign Working Group under the ITN along with Environment & Development Desk (EDD) of the Central Tibetan Administration (CTA) and Environment Desk of Dharamsala. The campaign centred on the plight of Tibet’s nomads, who are being dispossessed of Tibet’s grasslands, and called for urgent action to return stewardship of the fragile plateau under the grave threat from Climate change to those who have lived in a sustainable way and in harmony with the natural environment for generations. COP15 was a landmark for the group in taking Tibet’s environmental issues at such level. The team reached a significant number of delegates and negotiators, conducted numerous media interviews and held several well-attended public events. This conference has brought a lot of international and Tibetan media attention which was aired in Tibet as well.

With the milestone created by the Tibet 3rd Pole group at COP15 in Copenhagen, we hope to take this campaign further at the upcoming 17th Conference of Parties (COP17) at Durban.

*Since the UNFCCC entered into force, the parties have been meeting annually in Conferences of the Parties (COP) to assess progress in dealing with climate change, and beginning in the mid-1990s, to negotiate the Kyoto Protocol to establish legally binding obligations for developed countries to reduce their greenhouse gas emissions. From 2005 the Conferences have met in conjunction with Meetings of Parties of the Kyoto Protocol (MOP), and parties to the Convention that are not parties to the Protocol can participate in Protocol-related meetings as observers.