World Environment Day (WED) is the United Nations’ principal vehicle to encourage worldwide awareness and action for environment. Over the years it serves as the ‘people’s day’ for doing something positive for environment, starting individual actions into a collective power that generates an exponential positive impact on the planet.

TWA observed the day,5th June 2015, through awareness programs with school children and public.Tibetan Women’s Association, Student for a Free Tibet, India and International Tibet Network observed World Environment Day by raising awareness on the crucial environment situation inside Tibet. The UN declared theme for this year is focusing on Sustainable Living and hence the three Tibetan NGOs aimed to encourage the general public on adopting a more sustainable way of living. Individuals took their personal responsibilities and pledged for a sustainable society in the future. Today is World Water Day 2013 in the United Nations International Year of Water Cooperation. We are writing to share our concerns about the impact of China’s policies – especially its dam-building programme – on Asia’s regional water security, and to urge your government to join forces with other downstream nations to pressure China to enter into appropriate water-sharing agreements.

Over the last sixty years, China’s policies in Tibet, often called the earth’s “Third Pole” and the source of Asia’s great rivers, have led to widescale environmental degradation. This includes poisoned river and groundwater through unregulated mining, grasslands ecosystem degradation, and disrupted watershed and ecosystem services in the headwaters of these rivers, which has worsened already acute and chronic flooding downstream from Tibet, including your countries. In turn, global climate change is warming the Tibetan Plateau at twice the rate of the rest of the world, and the impact of this on Asia’s water supplies is exacerbated by China’s extensive dam-building programme, to harness hydro-power and divert water to mainland China. This programme threatens the safety, security, and sustainable livelihoods of more than one billion people downstream.

By claiming authority over the Water Tower of Asia, China is wielding considerable power over its neighbouring countries, yet it has not signed a single water sharing agreement. We urge you to act now to secure your future water supplies, by joining together with your counterparts in other nations downstream of the Tibetan plateau, and bring China to the negotiating table to sign appropriate regional and international water-sharing agreements. Tibet the Third Pole and its Impact on Asia’s Future

A Tibetan Women’s Association undertaking during the 32nd Kalachakra Initiation at Bodhgaya, January 2012

A petition drive (on the ground and online) titled ‘Nomads for Planetary Third Pole’ was very successful.  3500+ signatures were gathered at Bodhgaya.  One petition is addressed to the Environment Ministries of the ten downstream nations excluding China.  These are ten countries in Asia namely: China, India, Pakistan, Thailand, Vietnam, Laos, Cambodia, Myanmar, Bangladesh, Bhutan and Nepal all receive water from Tibet’s rivers.   These are the Mekong, Yangtse and Salween in the east, Brahmaputra in the center, and Kamali, Indus and Sutlej in the west. The second petition is addressed to the Environment Ministry of People’s Republic of China. The petition urges the Chinese leadership to halt the forced eviction of nomads from the Tibetan plateau and thereby ensure the future food and water security of Asia.

As part of the climate campaign, a climate conference titled ‘Tibet the Third Pole and its impact on Asia’s future’was held on Monday, January 9. The panel of experts included; Michael Buckley, travel writer and filmmaker on Tibet, Mr. Vijay Kranti, Indian writer and journalist, Tenzin Norbu, head of the Environment and Development office of the Central Tibetan Administration and Tenzin Dorjee, executive director of Students for a Free Tibet (SFT).

Norbu elaborated on what Tibet, established as ‘Asia’s Water Tower’ and ‘head region for 10 rivers in Asia’ could forecast on Asia’s future water security.   Besides establishing the prominence of Earth’s Third Pole’ in the age of climate change, he raised the alarm saying that ‘the rising permafrost temperature and Tibet’s melting glaciers will prove ruinous for Asia’s future.’ Norbu stated that the Central Tibetan Administration opposed the Chinese ‘environmental policies; mining, damming and river diversion’ being implemented inside Tibet because of its adverse impact on Tibet and Asia.

Michael Buckley presented on the environmental destruction taking place inside Tibet –  unchecked damming, river diversion and extensive mining. “This is man-made destruction that needs to be checked and, if left unchecked, will create environmental crisis for downstream nations” said Buckley.

Answering a question on ‘what could be done about damming in Tibet,’ Buckley said that ‘China is used to suppressing movements and have been successful in frightening the downstream nations.  It is imperative and timely for the United Nations to pass a resolution on water-sharing and that the exile advocates should pressure China to sign the resolution on trans-boundary rivers and that we could hope that there will be a movement within China on these pressing environmental issues.’

Vijay Kranti presented on the history of China’s control on the Asian subcontinent and on the long-standing injustices facing Tibetans in their own homeland. He expounded on how China’s continued dominance on the Tibetan plateau is a great threat to Tibet and a greater threat to India.  He was asked a question about the ‘Sino-India border dispute over Arunachal Pradesh’, to which he answered that ‘China being an illegal occupant of Tibet has no right to make noise over Arunachal.’  “India should stop remaining silent, and it is in India’s interest more than in the Tibetan interest to stand up to China’s might”.

Tenzin Dorjee explained that the environmental crisis in Tibet is happening in the dark and that is should cause an alarm to the rest of the world. He presented on the various campaigns SFT has led in speaking against the Nomad’s displacement. Tendor refuted the Chinese Government’s claim that the ‘resettlement of Tibet’s Nomads’ is a climate mitigation measure’ and on the contrary asserted that ‘Tibet’s Nomads have enabled the sustainability of Tibet’s vast grasslands.’ He presented on how the uprooting of nomads from the pastureland is connected to the loss of water and further commented that the loss of the 8000-year-old nomadic culture is an ethnic genocide, which endangers Tibet’s ecosystem and concluded that this ongoing genocide should be stopped.

Tendor also said that grassroots environmental campaigns protesting the Chinese acts of ‘mining and water diversion’ are already sweeping across Tibet and that many such protests have been successful. “It is essential that we amplify their voices and echo their demands and thereby celebrate their success,” he said.

After Tendor introduced information about the resistance movement in Tibet against the Chinese environmental projects and the victories achieved, TWA’s WEDD officer Tenzin Woebum made a brief presentation on the ‘the global actions that are already in place and the counter measures adopted by Tibet Third Pole (T3P), the global campaign working group. Woebum also spoke about TWA’s global climate actions such as Tibet Third Pole (T3P) representation at COP-15 and COP-17 Summit

Moderated by TWA’s Communication Officer Dhardon Sharling, this two-hour evening discussion included an interactive question and answer round and discussed how in the age of climate change, Tibet’s environment is under threat thus posing a greater threat to Asia and how this could be averted. The conference catered to a select invitation-based audience of 100 people: international media, local media, democracy activists, environmental researchers, and dignitaries representing some of the downstream nations namely: India, Bhutan, Burma, Thailand, Nepal, Vietnam. TWA executives presented an exclusive invitation to Shri Nitish Kumar, Chief Minister of Bihar who later apologized for not being able to attend the event.

TWA’s WEDD anticipates tangible action from the US Congress following the January 26, 2011 United States-China Economic and Security Review Commission hearing of a written testimony on Water Security and Environmental Management on the Tibetan Plateau, submitted by the Environment and Development Desk (EDD) of the Central Tibetan Administration. (CTA).

TWA will further strengthen its ‘Protect Tibet the Third Pole’ campaign and build on the petition campaign and thereby achieve our goals: 1)  seeking to ally with the downstream nations to halt the forced removal of nomads and 2) significantly alert the Asian countries on their future food and water security which is reliant on Tibet’s water and ecosystem. The highlights include World Water Day campaign, World Environment Day campaign and participation in the Rio Earth Summit and the COP-18 UN Summit.

Observer’s comments on the conference:

“I am quite taken by the quality of the videos and presentations made and the Tibetan groups have a strong message backed by powerful visuals to alert the downstream nations on Tibet’s environment.” Wilson Lee, Senior Program Officer, National Endowment for Democracy. (NED) based in Washington, DC.

“Initially, when I got the invitation, I thought it would be one of the many events happening simultaneously in Bodhgaya. But after one hour into the event, I was pleasantly surprised by the impressive panel, their presentations, their arguments and the excellent standard that was maintained throughout the two-hour event. It is my first ever participation in an event on environment and I am glad that this has stirred my interest in the subject” Mrs Aasha Reddy, Indian supporter for Tibet, based in Chennai, India. 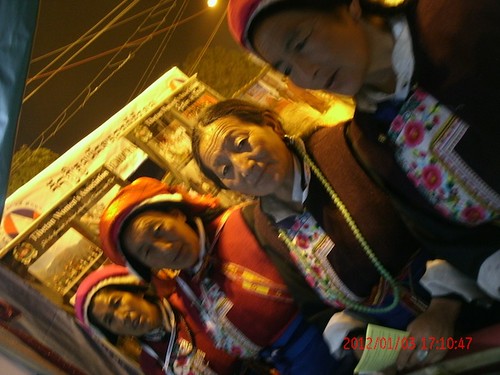 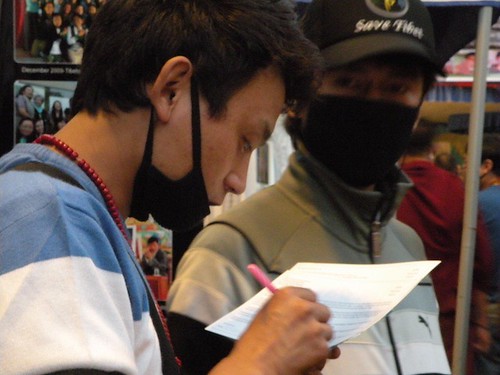 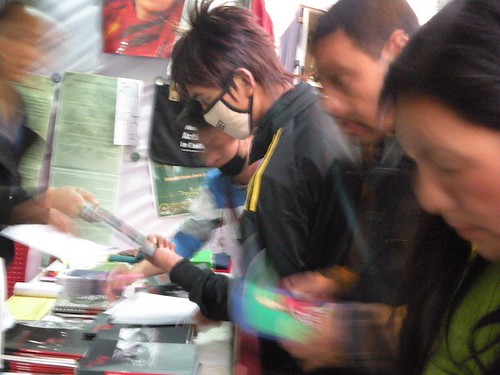 young groups at the stall 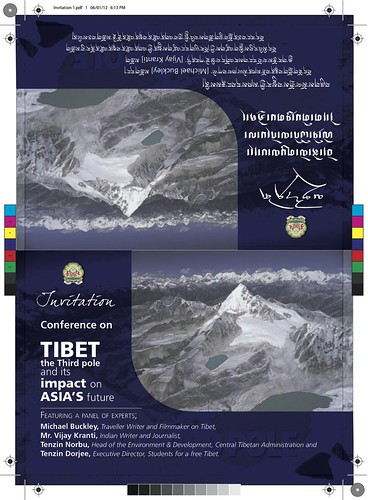 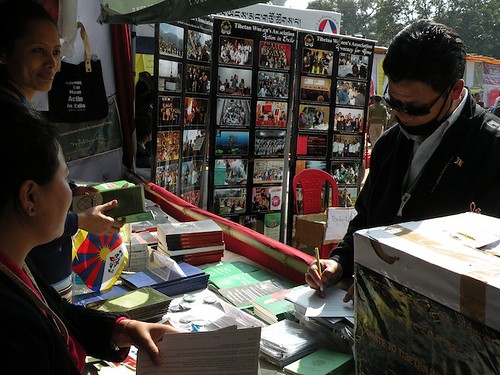 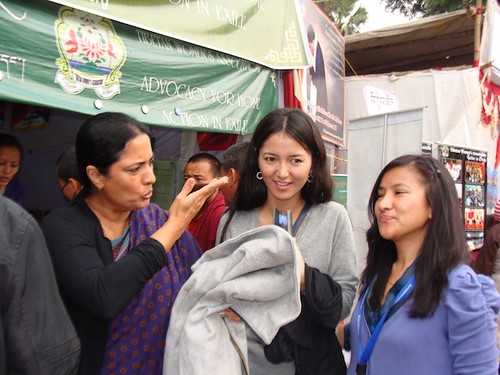 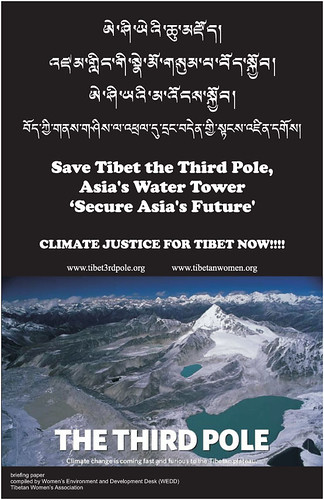 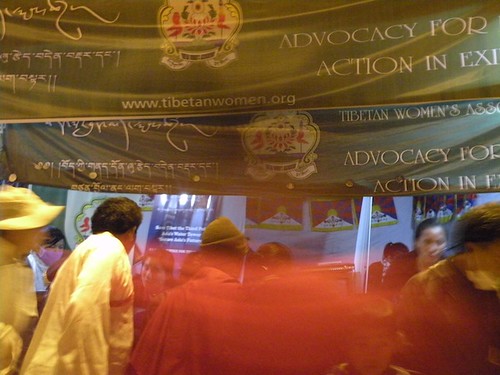 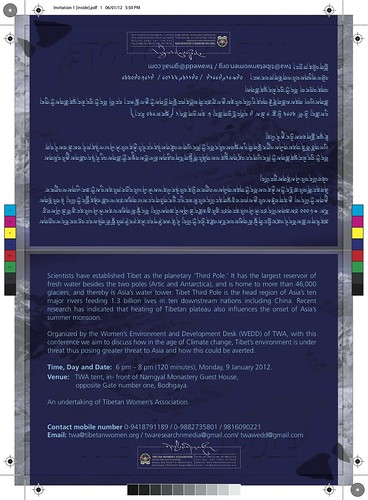 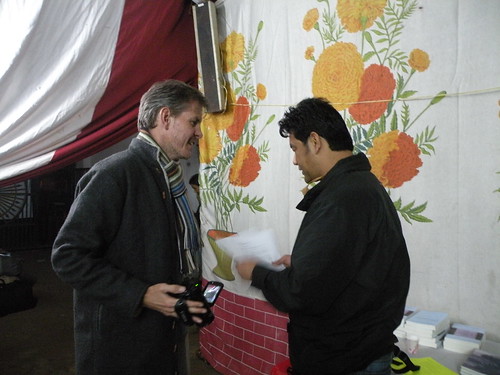 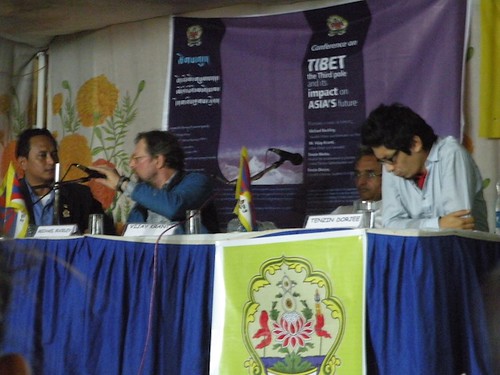 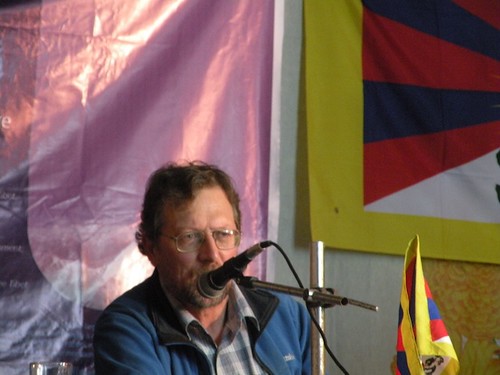 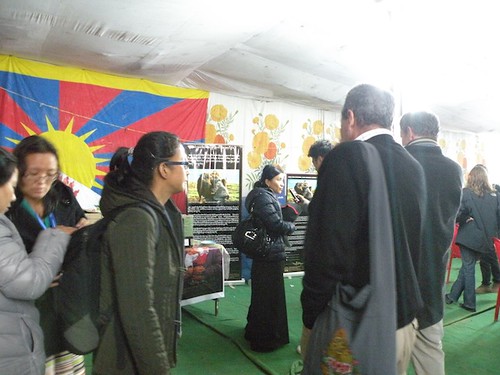 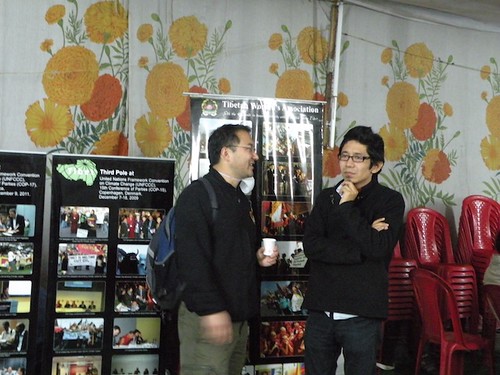 CC_tendor and wilson at TWA hall 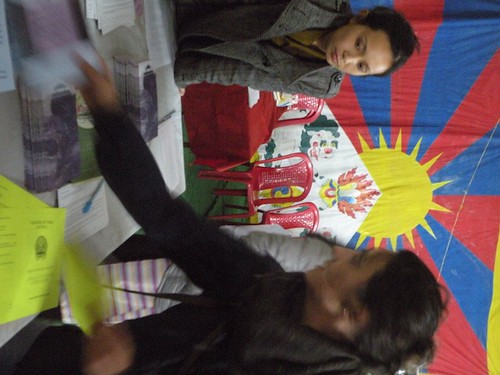 CC_TWA staff at the literature desk 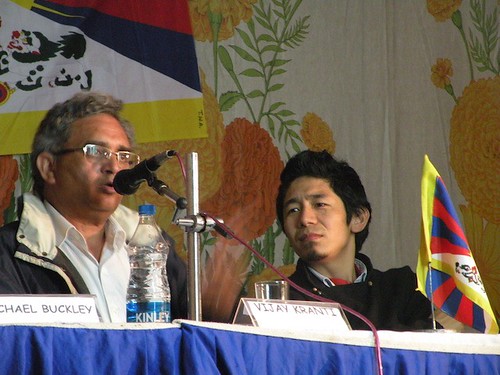 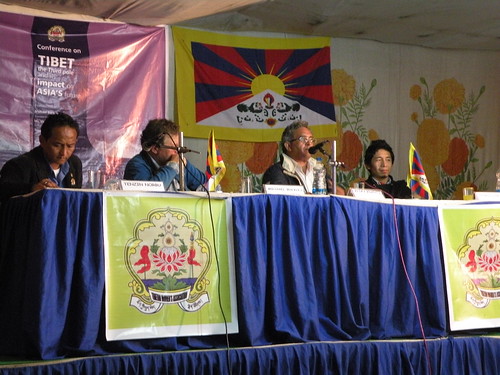 CC_Panel of Expets at the Climate Conference Dharamsala, January 2: Tibetan Women’s Association and Tibet Third Pole have launched a petition to the Ministry of Environment Protection of The People’s Republic of China. The petition appeals to the PRC to halt the forced removal of nomads from Tibet’s pastureland since this is not a climate mitigation measure but rather a disastrous environmental policy that threatens the survival of the ten downstream countries. We also alert the Ministry of Environment of Nine Downstream Nations dependent on Tibet’s rivers (India, Pakistan, Thailand, Vietnam, Laos, Cambodia, Myanmar, Bangladesh, Bhutan and Nepal) to the urgency of this issue and beseech that immediate pressure is put upon the PRC government to cease current policies of forced and coerced displacement.

[important]Please support the Tibetan nomads by signing and sharing the online petition here
(this petition page will also be updated with the number of offline signatories).[/important]

The petition was launched at the Buddhist Kalachakra teaching in Bodh Gaya this month, where TWA have a stall campaigning for nomads’ rights and showcasing TWA’s recent activities, including the November 2011 publication of a book on the critical situation currently facing Tibet’s nomads – Purging the Treaure House: displacement and the status of the Tibetan nomad.