The registration will be open until 30th November 2014. Please download the application form and email the filled form to our General Secretary, Nyima Lhamo at twaetadesk@gmail.com.

The trainees confessed that the experience was akin to a roller-coaster ride and that they benefited a great deal by being on the learning curve.

The young women participants shared commitment and to take strident steps in their everyday lives to perfect their leadership skills and hold the mantle of female leadership, to continue with the legacy of women’s leadership and thereby secure a safe and a sound future women across the globe.

We request you to share the information with women around who you think can benefit from this training program. SPREAD THE WORD PLEASE.

Tibetan Women’s Association pays for accommodations and transportation of the participants and guest speakers, as well as rental fees for the space. We also provide participants with the necessary learning tools such as study materials and stationery kit. This year’s leadership program is extremely important to continue the platform for empowerment and advancement of women.

This training will explore the different aspects of leadership; from identifying to building with practical implementation of the skills learned. There will be ample practical exercises, exposure trip, panel discussion with women leaders and professionals (Tibetans and non-Tibetans).

The Shelley and Donald Rubin Foundation, through the Tibet Fund based in the United States, supported this major venture of TWA with much-needed financial impetus. The National Endowment for Democracy also provided financial resources.

December 31, New Delhi: The week-long leadership program titled ‘Tibetan Women’s Advanced Leadership Training’ (TWALT), the 4th in the series, concluded today at the India Habitat Center. A panel discussion titled ‘Role of Women in Peace-building, Reconciliation and ensuring Accountability,’ marked the culmination of the training organized by Tibetan Women’s Association. 38 Tibetan women from across India converged in the Indian capital from December 25 to 31 for 7 days of ‘identifying, inculcating and implementing leadership skills.’

Three key speakers: Shri Mani Shankar Aiyar, former minister and current member of Parliament, Dr. Alana Golmei, activist and founder of Burma Centre in Delhi and Ms. Souzeina Mushtaq, journalist and writer from Kashmir, spoke at the momentous gathering of 50 people. Moderated by Dhardon Sharling, the 2-hour discussion established a substantive dialogue to identify the impediments and opportunities for women, to consider lessons learned and build on best practices and ways forward for bolstering women’s role in securing peace, reconciliation and accountability, across the globe particularly in Tibet, Burma, India and Syria.

As a part of the training, on December 26, the trainees staged a lobby campaign that was successful in getting Indian leaders and advocates of India’s Supreme Court to sign the petition urging the Spanish Government and the European Union to stand up for Tibet and to maintain judicial independence of Tibet lawsuit from political interference. Influential signatories include: Shri Bhakta Charan Das, Lok Sabha Member of Parliament representing Congress party, Shri Inder Singh Nomdhan, an independent Lok Sabha Member of Parliament, Smt Meenakshi Lakhi, Politician, Lawyer and National Spokesperson for Bharatiya Janata Party (BJP), Shri Dig Vijay Singh, former Chief Minister of Madhya Pradesh and General Secretary of All India Congress Committee (AICC).

On December 30, the trainees undertook an outdoor project titled ‘Rebuilding Lives,’ wherein they visited three relief camps in Uttar Pradesh. Besides engaging in relief work catering to women and children victims of the recent riots in Muzaffarnagar, the trainees filed a photo-story narrating the pressing social issues facing the inhabitants of the relief camps.

“I think this is one program every Tibetan woman should be a part of, once in her lifetime. It gave me a life-changing experience,” said Tenzin Lhadon, M.Phil student in JNU, Delhi.

“TWA’s leadership program is intense and challenging as it sets out to mold us, young women as future leaders,”- said Nyima Choezom, executive member of TYC Centrex.

“This year we focused more on strategies including strategic communications and leadership strategy and execution,” said Nyima Lhamo, General Secretary of TWA.

“The training designed to empower Tibetan women on the leadership front focuses on bolstering female representation in the political and social arena of the exile Diaspora,” said Ms. Tashi Dolma, President of TWA.

Delhi, December 26, 2013: As a result of the lobby campaign carried out today in the Indian Capital by 33 Tibetan women participants of the 4th  Tibetan Women’s Advanced Leadership Training (TWALT), an undertaking of Tibetan Women’s Association (TWA), leading Indian politicians and advocates of Supreme Court of India signed the petition urging the Spanish Government and the European Union to stand up for Tibet and to maintain judicial independence of Tibet lawsuit from political interference.

plan to limit the independence of Spain’s judiciary, in a move that could lead to a ground-breaking Tibet lawsuit, which implicates Chinese leaders, being shut down. The petition reminds Spain of its universal duty to prevent and punish the most egregious human rights violations in Tibet, as offenses against all humanity. It appeals the Spanish Prime Minister Mariano Rajoy to adhere to the democratic principles upon which Spain and the rest of the European Union is founded and stand fast in support of judicial independence from political interference.

The Indian political figures, intellectuals and advocates joined the global call urging the European Union to Stand Up for Tibet and to stand with Spain in resisting China’s unacceptable pressure against an impartial criminal investigation, and to support the internationally recognized human rights standards that these Tibet lawsuits are investigating.

Photos of the seven-day training can be viewed at: 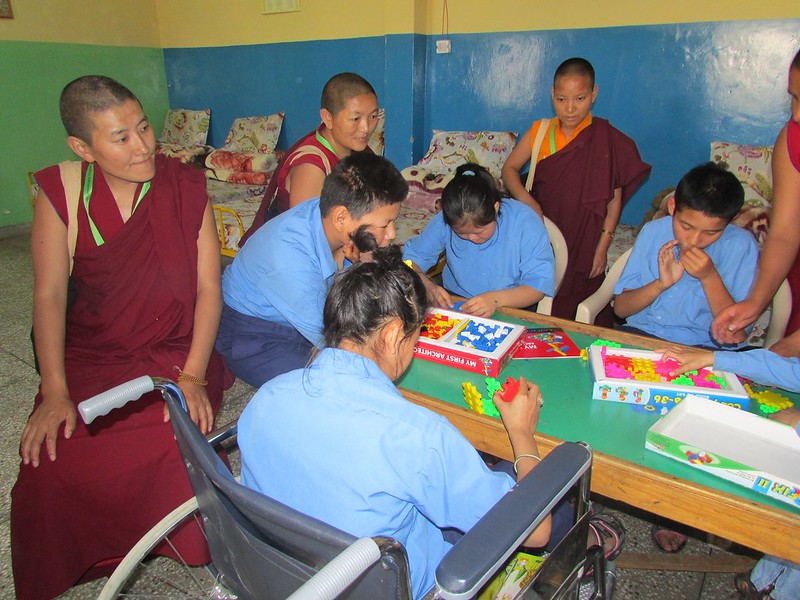 As part of the practical training, the nuns worked on a social educational project proposal through the week and had the project implemented in teams at various Tibetan institutes based around Dehradun.

A day was specifically reserved for an education tour, the nuns visited the prestigious ‘Doon School’ where the school administration very graciously arranged a half day long school visit for the nuns to explore and discover  the various educational conveniences enjoyed by the students in the school. After lunch, the group visited the ‘Forest Research Institute’, Dehradun; one of the ancient architects built by the British Empire; now serves as a museum and research centre.

20th April, 2013, Saturday the 10th day of the third month in Tibetan calendar (Pan-Chu), was an auspicious day. On that day, a mass prayer was led by the 26 nuns of different sects and nunneries, attended by the school students and staffs.

Nun Phuntsok Lamdon, Dolmaling nunnery said, “I am attending such program for the first time in my life, I am amazed to see the transformation from the level of shyness to a sense of self-belief and standing in authority as the week progressed.”

The nuns expressed that this program assisted them in realizing their skills and reinforced their beliefs and self-confidence and their ability. TWA hopes to see the nuns pursue leadership roles in greater numbers and at higher levels. We look forward to another enriching and empowering program to be held in 2014.

TWA’s General Secretary, Nyima Lhamo states that “with the help of these programs, we hope to maximize their influence and to discover what they are truly capable of in their lives. The nuns who attended the course began to find out that they have talent and the ability which can be harnessed not only for the furthering of their own potential, but for the benefit of wider society.”

Coordinated by TWA’s Empowerment through Action Desk, ETADesk, the project has been graciously funded by the Science Meets Dharma, an institute which aims to provide monks and nuns in Tibetan monasteries in India with access to scientific education since its inception in 2009.

Tibetan Women’s Association (TWA) is the second largest Tibetan Non- Governmental Organization (NGO) based in exile in India, and the only Women’s NGO in Tibetan history. We are a 16,000-member organization with 56 chapters on four continents: Asia, North America, Europe, and Australia. TWA’s slogan is ‘Advocacy for Home, Action in Exile.’ This training will explore the different aspects of leadership; from identifying to building with practical implementation of the skills learned. There will ample practical exercises, exposure trip, event management shows, panel discussion with women leaders and professionals (Tibetans and non-Tibetans).

[important]Click here to download the Leadership Training Application Form[/important]
Accommodation and travel: Tibetan Women’s Association pays for accommodations and transportation of the participants and guest speakers, as well as rental fees for the space. We also provide participants with the necessary learning tools such as study materials, papers, notebooks, folders and pencils. This year’s leadership program is extremely important to continue the platform for empowerment and advancement of women.

Registration fee: Please note that you will have to contribute Rs.250 as registration fee if you get selected. This will be fully refundable upon completion of the training.
If you have problems completing the registration form below contact General Secretary of Tibetan Women’s Association Nyima Lhamo via email – twaetadesk@gmail.com, or feel welcome to telephone with any queries – 01892 221527 or 09882502821 .

The final phase of the training provided ample practical experiences – exposure trip, event management, lobbying Indian leaders and the panel discussion with women leaders (Indians and Tibetans). The highlights included: active participation in the NDTV studio debates such as ‘NDTV special ‘Is Tibet a lost cause,’ chaired by Bharkha Dutt’ and ‘NDTV Left, Right and Centre’ hosted by Nidhi Razdan. On November 28, a planned hour-long observing session at the Lok Sabha house of Indian Parliament to witness the ongoing winter session was cancelled after the unexpected adjournment of the House at 12 Noon. Nevertheless, the participants staged daylong ambush lobbying of the Indian leaders at the Parliament grounds which resulted in four Members of the Indian Parliament signing the ‘Stand up for Tibet’ pledge. You can view 2011′s full ATWLT report here and see some photos below or all on Flickr.

The Shelley and Donald Rubin Foundation, through the Tibet Fund based in the United States, supported this major venture of TWA with much-needed financial impetus. The National Endowment for Democracy also provided financial resources.

“Thank you TWA for such an initiative and it’s worth sacrificing my bar exam for this training. Gladly met many beautiful women and great brains, thank you all”

“Everything was so perfect, not only the training, but also all other facilities you have provided was really impressive. Keep up the great work and I wish you all the very best for future. Hope you keep doing these training and empower more and more Tibetan women.”

“It has been a great pleasure getting to know you all and I am feeling good to know that the Free Tibet cause is in good hands. I am absolutely blown away by everything that this whole group produced throughout the training, keeping creativity alive and thriving.” Vicki Robinson, Trainer, Canada.