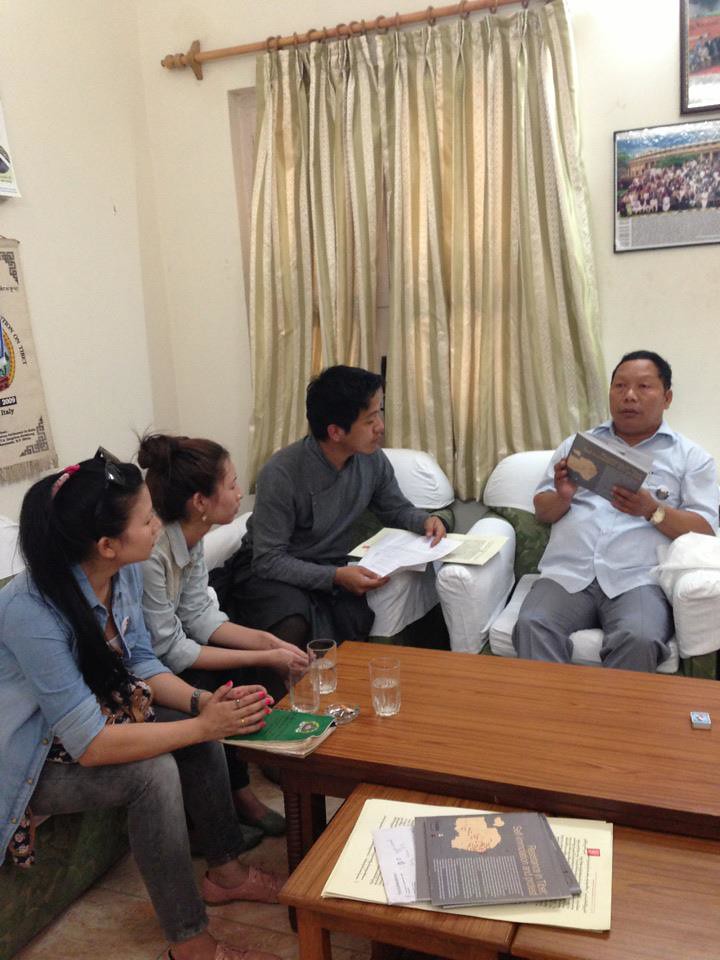 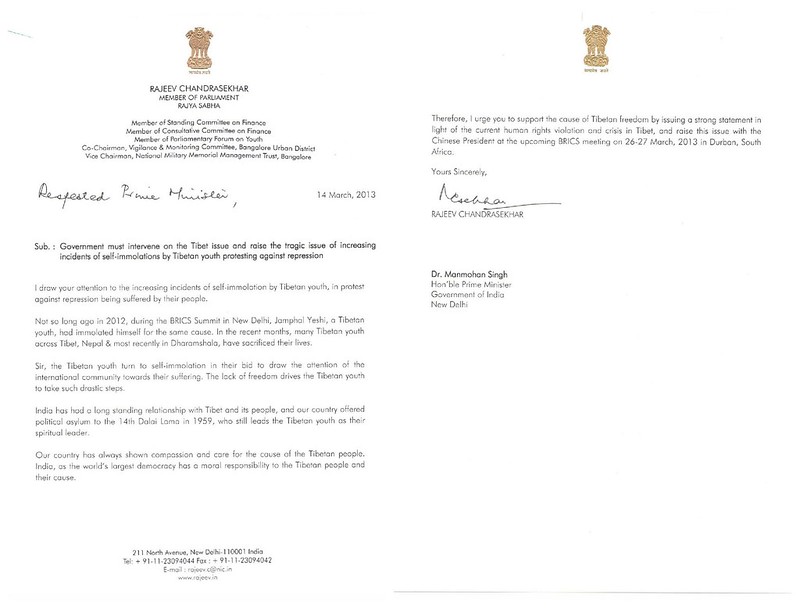 The Tibetan press release (PDF) can be viewed here. Please also find pictures of the two-day campaign at the bottom of this post, or here.

November 3, New Delhi: In the light of the eleven unprecedented acts of self-immolation of young Tibetans in Tibet since 2009 (with the latest reports of a 12th incidence and the 6th case of self immolation death) and ensuing crackdown in Tibet, TWA’s delegation – comprising of president Dolkar Lhamo Kirti and Research and Media officer Dhardon Sharling – embarked on two days of face-to-face lobbying with Chinese and Indian leaders in India’s capital Delhi.

This morning, TWA’s president managed to instigate a brief meeting with Lu Hao, member of 17th Communist Party of China Central Committee, Member of the Tibet Work Leading Group and secretary of the CPC Gansu Provincial Committee. The southwestern corner of Gansu is home to a large Tibetan population of more than 400,000 and contains seven Tibetan counties including the autonomous county of Pari and the Kenlho Tibetan Autonomous prefecture.

Dhardon describes what occurred; “at 10:50 am, Dolkar staged an ambush encounter which interrupted a meeting between Lu and two other foreign diplomats at the lobby of Hotel Taj Mahal, while I hid behind a marble pillar witnessing the meeting and silently taking pictures from my phone camera.”

Within the two minutes Dolkar quickly briefed Lu Hao on the current self-immolation crisis in Tibet and requested that he heed to the demands of the petition titled ‘Tibetans call for Global Intervention to save Tibetan lives in Tibet.’

“After a formal mutual greeting ‘Nyi-Hao’ (meaning hello in Chinese) and offering of khathak (white scarf), Lu listened to me for a minute, after which Lu told me that he is in India for a different purpose (an exchange programme with the International Department of the Communist Party of China) and that he is not in a position to accept the petition and the scarf” said Dolkar.

“The awe and anxiousness on Lu’s face and in the gestures of the visiting Chinese delegates was palpable on seeing Dolkar dressed in Chupa, holding a khathak and a petition,” said Dhardon.

Both Dolkar and Dhardon were then frisked by the hotel security staff and asked to leave the hotel to enable Lu and his delegation to head to their meeting venue. TWA delegates later left the petition and the khathak in the hands of the Chinese Embassy staff present at the hotel, to be passed on to Lu.

According to Dolkar, “the petition included two appendixes: 1) Demands to the People’s Republic of China and from the G-20 leaders and 2) The factsheet of the 11 self-immolation cases in Tibet since 2009, and urged the Chinese leadership to end the repression in Tibet that has caused the self-immolations. It also earnestly requested Lu Hao to raise these demand to Hu Jintao and for the Chinese leadership to commence meaningful negotiations with the Tibetan Leadership in Exile during the lifetime of His Holiness the Dalai Lama, in order to attempt to peacefully resolve the Tibet issue.”

Lu and his 12-member delegation left Beijing on October 29 for a good will visit to three countries on invitation of Indonesia’s Golkar Party, India’s Foreign Ministry and Pakistan People’s Party. Lu arrived in Delhi on November 2 and will leave for Agra on November 4 and then head to Pakistan.

During his India visit Lu stressed to the Indian government the “need of strengthening bilateral relations and furthering cultural exchange programme between the two countries.”

According to Dolkar, “while the year 2011 has been marked as India-China year of Exchange, ironically, the 15th round of border talks between India and China is scheduled to be held in Delhi this month and India took a decision this week to deploy 90,000 soldiers at the Indo-Chinese border.

“We have made assertive explanations to the senior Indian leaders that ‘strong, bilateral Sino-India ties’ can be achieved only if the long-standing issue of Tibet is resolved and only when India bolsters its stand on Tibet and sheds its acquiescence to China,” said Dhardon.

On November 2, on the eve of the G-20 summit and coinciding with the global action – ‘Enough! Global Intervention Now to save Tibetan Lives’ – TWA’s delegation held meetings with senior leaders of the ruling Indian National Congress: Mani Shankar Aiyar, former union cabinet minister and current chairman of Congress party’s “political training department and the department of policy planning and coordination” and Dr. Karan Singh, former ambassador to United States and UNESCO, and the present Chairman of Foreign Affairs Department of Indian Government.

Though an attempted meeting with Congress President Sonia Gandhi did not take place, a petition was delivered to Sonia through Dr. Karan Singh. A petition was also handed over to the Minister for Environment and Forests, Jayanti Natarajan at her office at CGO complex soon after she arrived from Beijing on November 3 morning.

An exclusive meeting with BJP leader Sushma Swaraj took place at her residence on November 3; as the leader of the opposition party, Sushma agreed to table the Tibet issue during the upcoming winter session of the parliament beginning November 22.

“We have urged the Indian leaders to push the UPA (United Progressive Alliance) led Government to raise the Tibet issue with the Chinese leadership at constant intervals and, importantly, to pressurize the Chinese Government to settle for meaningful negotiations with the Tibetan Leadership in Exile,” said Dolkar.

As an organization dedicated to the middle way approach which seeks genuine autonomy for Tibet, TWA believes that beside high-level lobbying with governments in order to seek multilateral diplomatic intervention for Tibet, direct engagements with member of Chinese leadership are effective ways to attempt to address the crisis in Tibet and, significantly, to accomplish the aspirations of the Tibetan martyrs.

The Tibetan Women’s Association (TWA) is the second largest Tibetan Non Governmental Organization (NGO) based in exile India and the only Women’s NGO in Tibetan history. We are today a 16,000 member organization with 56 chapters in four continents; Asia, US. Europe and Australia. TWA ‘s slogan is ‘Advocacy for Home and Action in Exile.’ 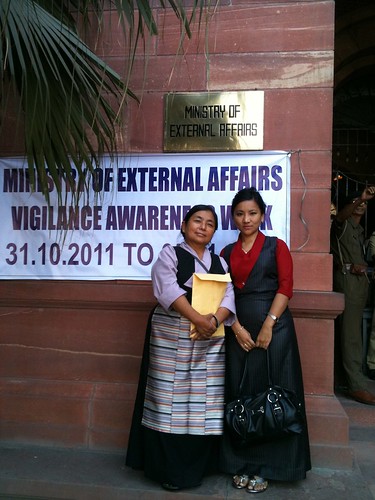 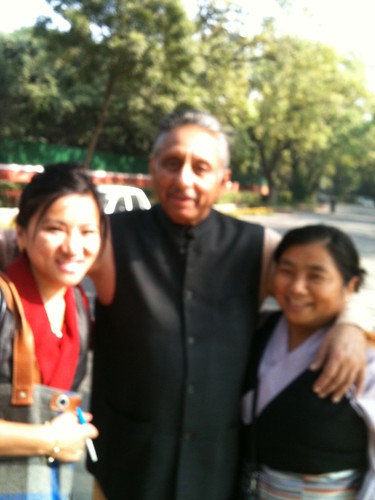 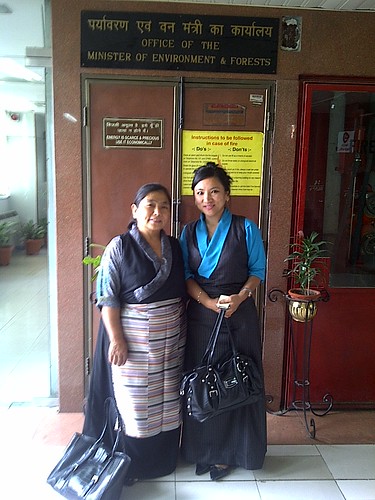 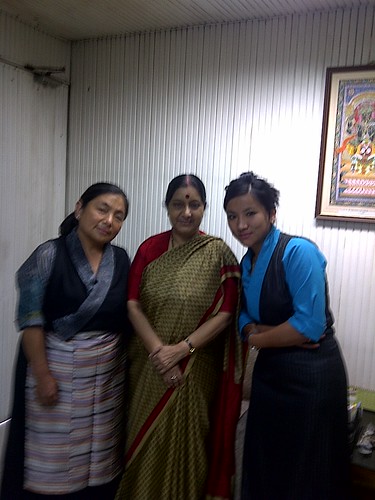 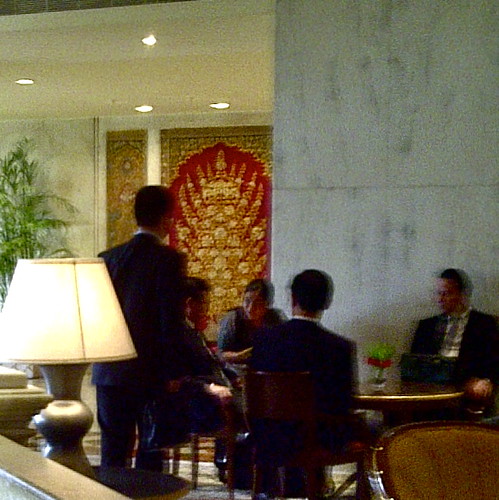 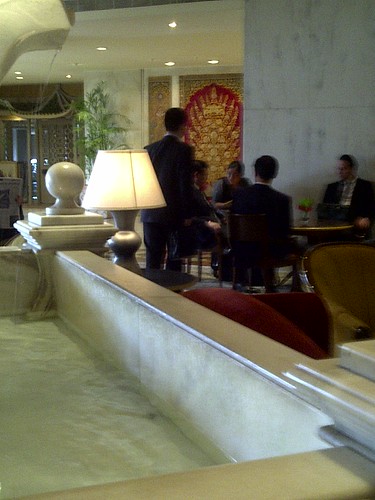 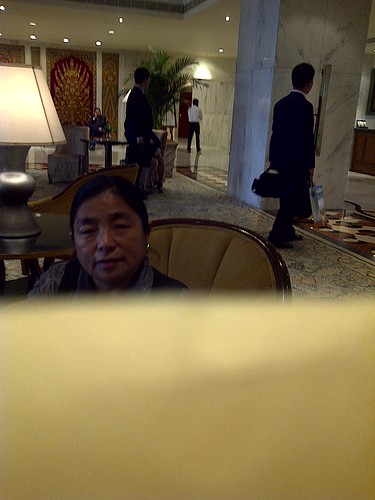 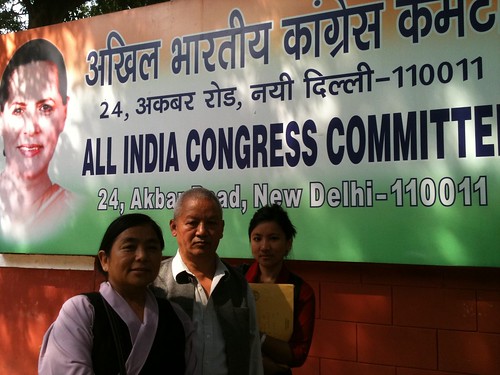