The campaign video ‘Xi Face the Tibet Challenge’ can be viewed here:
http://youtu.be/Z_uMMg5IeaI

TWA calls on Xi Jinping to face the Tibet Challenge by holding talks with the Tibetan leadership in exile, particularly with the envoys of His Holiness the Dalai Lama.

“Sadly, over the last 18 months, we didn’t see the Chinese Government under Xi’s leadership address the legitimate grievances of Tibetan people inside Tibet,” said Ms. Tashi Dolma, President of TWA.

The situation in Tibet is exacerbated by a deepening crackdown by the Chinese government on any forms of peaceful expressions for freedom by the Tibetan people, thus deepening the anguish Tibetans feel. Human rights situation in Tibet is marked by deterioration of rights protection and an intensification of clampdowns. There have been arbitrary shootings, arrests, and the indiscriminate use of force – actions which have reduced Tibetans to the level of a subject people. The denial of religious freedom and large-scale government sponsored settlements by non-Tibetans threaten to obliterate Tibetan identity.

For the last 18 years of TWA’s history in exile, TWA has been calling on the Chinese government to peacefully resolve the issue of Tibet. But their stringent and repressive policies have engendered a forbidding situation that has spiraled a spate of self-immolations inside Tibet, of 131 Tibetans including 21 Women.

“Therefore today, as Xi Jinping steps into India, the exile homeland for Tibetans, we call on him to review China’s failed policies in Tibet, to end the crisis inside Tibet and significantly to fulfill the genuine aspirations of the Tibetan people who sacrificed their lives calling for ‘freedom for Tibetans inside Tibet’ and for ‘the dignified return of His Holiness the Dalai Lama back to Tibet’,” said Tashi Dolma,

A week prior to Xi Jinping’s India visit, TWA has submitted appeal letters to the Indian Prime Minister and the Indian Minister for External Affairs urging them to raise Tibet. TWA leaders will also engage in a two-day direct lobby campaign with the Indian leaders.

July 1st, 2014: Tibetan Women’s Association received response from the office of Prime Minister of the Republic India for our humble congratulation note for Shri Mr. Narendra Damodardas Modi’s landmark victory. We are highly thrilled by this acknowledgment.

We remain deeply grateful to the Government of India for all the support and help bestowed upon us and more importantly for providing the requisite security for His Holiness the 14th Dalai Lama to date. Delhi, December 26, 2013: As a result of the lobby campaign carried out today in the Indian Capital by 33 Tibetan women participants of the 4th  Tibetan Women’s Advanced Leadership Training (TWALT), an undertaking of Tibetan Women’s Association (TWA), leading Indian politicians and advocates of Supreme Court of India signed the petition urging the Spanish Government and the European Union to stand up for Tibet and to maintain judicial independence of Tibet lawsuit from political interference.

plan to limit the independence of Spain’s judiciary, in a move that could lead to a ground-breaking Tibet lawsuit, which implicates Chinese leaders, being shut down. The petition reminds Spain of its universal duty to prevent and punish the most egregious human rights violations in Tibet, as offenses against all humanity. It appeals the Spanish Prime Minister Mariano Rajoy to adhere to the democratic principles upon which Spain and the rest of the European Union is founded and stand fast in support of judicial independence from political interference.

The Indian political figures, intellectuals and advocates joined the global call urging the European Union to Stand Up for Tibet and to stand with Spain in resisting China’s unacceptable pressure against an impartial criminal investigation, and to support the internationally recognized human rights standards that these Tibet lawsuits are investigating. Tibetan Women’s Association received an acknowledgment letter from the honorable External Affairs Minister of India, Shri Salman Khurshid. The letter was a response to an appeal letter submitted by TWA on 15th October. In the appeal letter, we urged for his Excellency’s intervention to stop Chinese authorities from shooting and injuring unarmed Tibetans in Driru for appealing their demands peacefully.

60 years of harsh policies have failed to change the mind of Tibetan people; instead, the resistance is becoming stronger. Reeducation through Labour, patriotic re-education, various propaganda campaigns, random imprisonment, implementation of inhuman laws and sinicization are failed policies.

2008 Uprising, more than 120 self-immolation, peaceful protests like recent Driru case are evident to prove resistance of Tibetan people and also a clear message to the PRC that Tibetan ethnicity could not be destroyed easily.

Tibetan Women’s Association condemns the shooting and injuring of at least 60 Tibetans by Chinese security forces in Driru, Nagchu, Central Tibet (Ch: Biru, Naqu Prefecture, Tibet Autonomous Region) on 6 October [1]. Chinese troops opened fire on Tibetans who had gathered to call for the release of a villager, named as Dorje Dragtsel. Dragtsel had been detained on 3 October after objecting to orders from a visiting ‘patriotic education’ work team, which was attempting to force Tibetans to raise the Chinese flag and show loyalty to the Communist Party. The previous week, dozens of Tibetans in Driru were beaten and injured, and more than 40 detained by security forces, after the authorities failed to compel locals to raise the Chinese flag for China’s National Day [2].

These outright state-perpetrated human rights violations come just two weeks before China’s human rights performance is to be reviewed by the United Nations Human Rights Council in Geneva on 22 October.

It is undeniable truth that the Chinese occupation of Tibet and more than six decades of rule has incited greater resistance and acted as an unwavering catalyst to the increasing number of self-immolations as well as peaceful demonstraions. Moreover, it is high time to accept the failed policies and conduct a review of the policies that force Tibetans to carry out these non-violent protests.

Photos of the campaign can be viewed here: 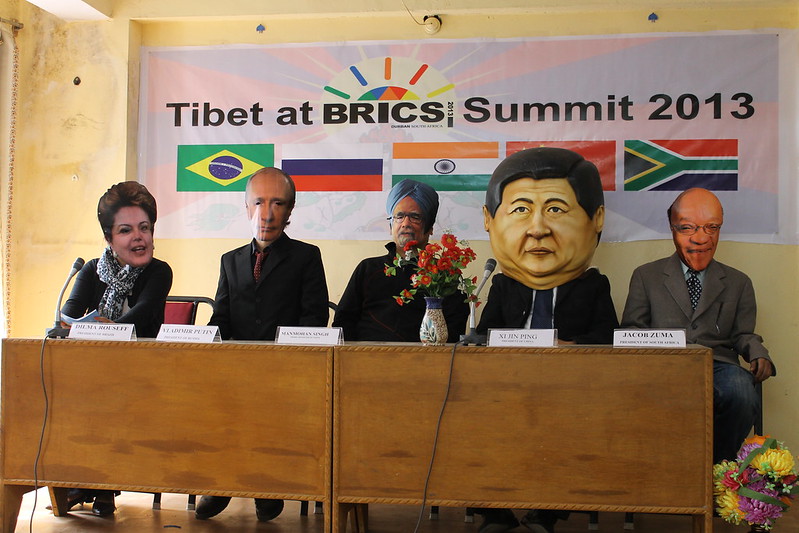 Dharamshala: As government leaders from Brazil, Russia, India, South Africa and China prepare to meet for the BRICS Summit in Durban, Tibetans demand action for Tibet as China’s new President Xi Jinping travels to Durban for his first summit as Head of State, and highlight Xi Jinping’s Tibet Challenge.

A two-day summit starting tomorrow will witness a historic meeting of Xi Jinping with government leaders from Brazil, Russia, India and South Africa in Durban, South Africa, while the self-immolations in occupied Tibet – now totaling at least 110 – show no sign of abating. “In the months since Xi Jinping was elevated to the top of the Chinese Communist Party, there has been an increase in China’s hardline response to dissent in Tibet, with a heightened military presence, mass detentions and a campaign to “criminalize” family members of self-immolation protesters.” said Tashi Dolma, President, Tibetan Women’s Association. “These actions and China’s anti-Dalai Lama propaganda are exacerbating tensions in Tibet. Through this campaign we will explain the nature of Xi Jinping’s “Tibet Challenge”, and call on BRICS leaders to act collectively and with principle, to press Xi to lift China’s crackdown and urgently review China’s policies in Tibet.”

“Tibet is Xi Jinping’s number one challenge and he has to address the legitimate grievances of Tibetans living in occupied Tibet and bring about an end to the tragic wave of self-immolations.” said Dorjee Tseten of Students for a Free Tibet India. “Recently Indian MP Shri Rajeev Chandrasekhar urged Prime Minister Manmohan Singh to raise the ongoing critical self-immolation issue inside Tibet with his counterpart Xi Jinping at the BRICS summit. This is also a challenge to other BRICS leaders not to shy away from this reality, and press President Xi to use his new position to find a just and lasting solution for Tibet.”

Tibetans and supporters from the BRICS nations have issued a joint statement urging their respective government to discuss the Tibet issue with Xi Jinping. We received news of another self-immolation yesterday by a 30 years old mother of four. Tibetans inside Tibet are continuing to resist against brutal security measures by Chinese police. “Tibet today is one of the most repressed and closed societies in the world, where merely talking on the phone can land you in jail. Support for the Dalai Lama can be prosecuted as an offence against the state,” Senator Robert Menendez, Chairman of the powerful Senate Foreign Relations Committee said.

We have also sent an open letter to the embassies of the BRICS nations in India including Indian PM office. In the letter we asked concerned government not to hide from the truth about China’s brutal repression of the Tibetan people. We appealed them all to urge President Xi to alleviate the situation by lifting the crackdown in Tibet and urgently review China’s policies in Tibet. We have also urged them to press Mr. Xi to allow the United Nations High Commissioner for Human Rights to visit all Tibetan areas as a matter of urgency.

Notes:
1. See Resistance in Tibet: Self-immolation and Protest, a timeline report which documents the current wave of self-immolations and protests across Tibet http://issuu.com/internationaltibetnetwork/docs/resistanceintibet_selfimmolationsandprotest