Women scream for urgent measures to resolve the Tibet crisis

The ‘shout out to Chinese leaders campaign’ is first of its kind, wherein 200 Tibetan women from 33 chapters from across India and Nepal screamed on top of their voices raising 3 demands directly addressed to China’s new president Xi Jinping.

In the light of the gross human rights violations inside Tibet, the situation in Tibet is exacerbated by a deepening crackdown by the Chinese government on any forms of peaceful expressions for freedom by the Tibetan people, thus deepening the anguish Tibetans feel.

For the last 29 years of TWA’s history in exile, TWA has been appealing and requesting the Chinese leadership to peacefully resolve the issue of Tibet. But their stringent and repressive policies have engendered a forbidding situation wherein we are witnessing an unprecedented spate of self-immolations inside Tibet, of 107 Tibetans including 14 Women. The Chinese leaders have time and again deliberately mishandled the crisis in Tibet.

“Therefore today, as Xi Jinping formally assumes the title of president and as we commemorate the 5th anniversary of the ‘2008 spring uprising in Tibet,’ we are shouting out to the Chinese leaders to review their failed policies in Tibet, to end the crisis inside Tibet and significantly to fulfill the genuine aspirations of the Tibetan people who sacrificed their lives calling for ‘freedom for Tibetans inside Tibet’ and for ‘the dignified return of His Holiness the Dalai Lama back to Tibet’,” said Tashi Dolma, president of TWA.

TWA’s general secretary Nyima Lhamo said “with this campaign, we want to remind the new Chinese leadership that the moment is now for them to face the Tibet challenge. The Chinese government must realize that Tibet presents an opportunity for them to present themselves as a civilized and progressive society and fulfill their claimed domestic policy of harmony and foreign policy of progress.”

The TWA organized ‘3-day mass solidarity campaign’ titled ‘Tibetans stand together in joy and sorrow’ included sit-in protest, lobbying Indian leaders, peace march, prayer meetings and signature campaign. The sit-in event at Jantar Mantar saw a stream of visitors and speakers who addressed the gathering. Shri Nitin Gadkari, former President of Bharatiya Janata Party (BJP) said that he is ‘aware of the grim situation inside Tibet and remain saddened over the heightened repression.’ “I have and will always stand by the Tibetan people and their unwavering struggle for freedom,” said the BJP leader.

1. United Nations to send their delegation to visit the affected areas in Tibet.
2. The International Community to express solidarity with the self-immolation protests inside Tibet.
3. Chinese Government to review their failed repressive policies in Tibet.
4. International media to gain fair and free access into Tibet.
5. World Governments to pressure China to engage in a dialogue with the envoys of His Holiness the Dalai Lama and the Central Tibetan Administration.

Photos of the campaign can be viewed here: 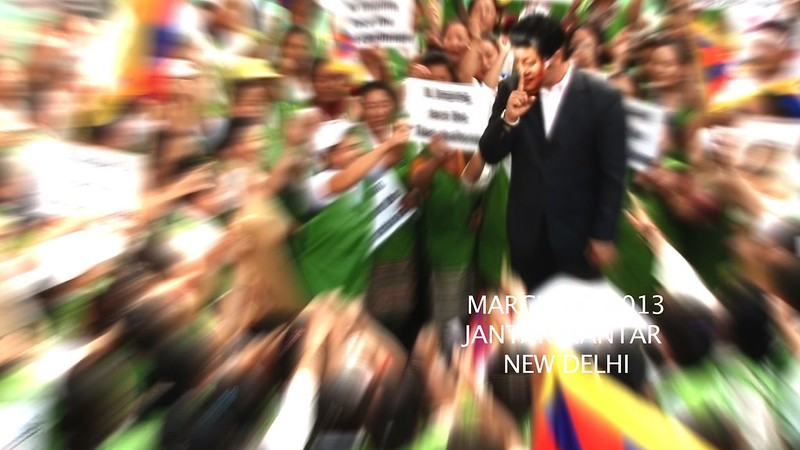 Youtube video of the campaign can be viewed here:
http://youtu.be/iUEDMUJVvSI